Sleep is a complex and dynamic process that affects how you function in ways scientists are now beginning to understand. During a night our sleep is marked by an alternation of 4 different stages: this is what we call sleep cycles. 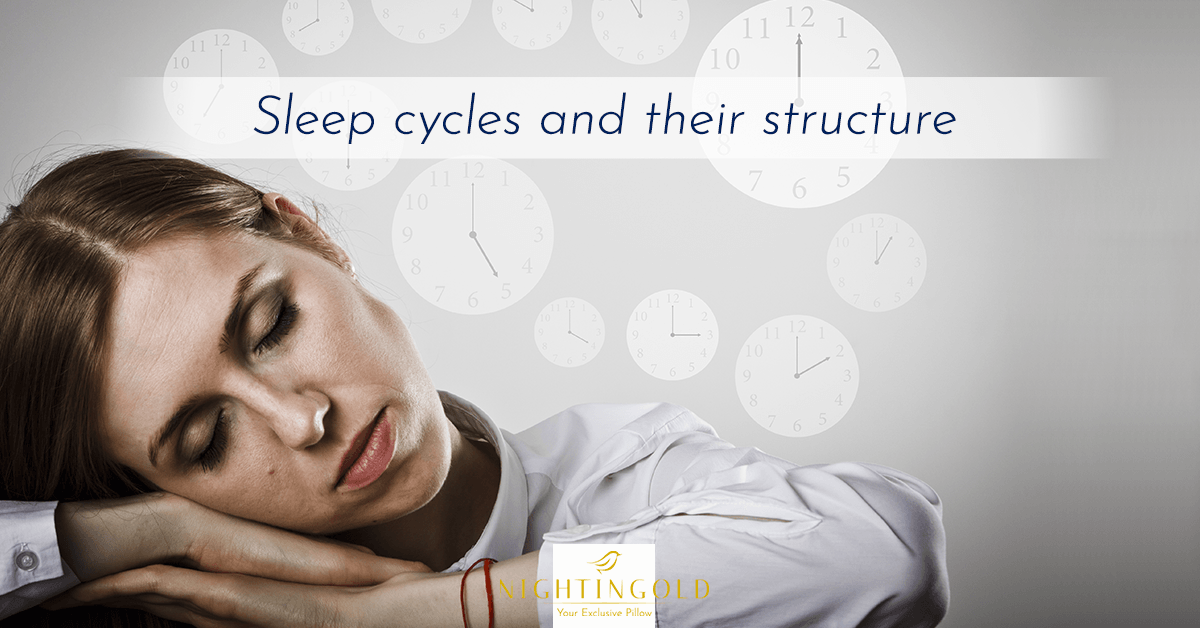 A sleep cycle progress through the stages from light to deep sleep then reverse back ending with time in REM phase, where dreams occur. Don’t underestimate none of these phases: each one is important to perform good sleep cycles.

Let’s try to understand better the complex mechanism that stands behind our sleep and, therefore, our health.

Sleep architecture represents the cyclical pattern of sleep as it shifts between the different sleep stages. It allows us to produce a picture of what our sleep looks like over the course of a night, taking into account various depths of sleep as well as arousal to wakefulness. Sleep architecture can be represented by a graph called a hypnogram.

There are generally four to five different sleep cycles during a given night and each of one lasts for about 90 to 120 minutes, shifting from lighter stages to deepest ones. All single stage is important for a good sleep quality and for your health.

There are two basic types of sleep:  rapid eye movement (REM) sleep and non-REM sleep (which has three different stages).  Each is linked to specific brain waves and neuronal activity.  You cycle through all stages of non-REM and REM sleep several times during a typical night, with increasingly longer, deeper REM periods occurring toward morning.

Typically, a person would begin a sleep cycle every 90-120 minutes resulting in four to five cycles per sleep time, or hours spent asleep.

A person’s sleep time (approximately 6-8 hours for adults) can be thought of as 2 halves.  The first half for a majority of people consists mostly of a deeper sleep with sporadic periods of Stage 1 and short REM periods.  As the night progresses, the lightest sleep increase  with lengthening periods of REM occurring.

Keep reading to discover the characteristics of each sleep stages.

You have already understood that your  6-8 hours of sleep are made by an alternation of different sleep cycles (from four to five per sleep time) and that a sleep cycle itself is the progression through the various stages of non-REM sleep to REM sleep.

For a majority of people, a sleep cycle begins with a short period of Stage 1 sleep whereby the body begins to relax. 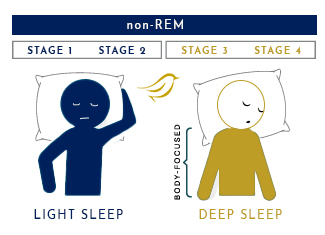 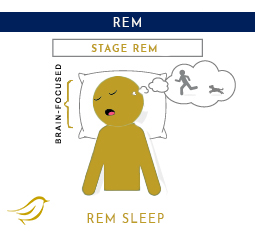 The lightest stage of sleep – Stage 1

Light sleep initiates your sleep cycle and acts as a transition to deeper sleep stages. During this stage your muscles begin to relax, your heart rate and breathing slow down, and you wake up easily. During light sleep, you can expect the following:

Stage 1 is the lightest stage of non-REM sleep.  Often defined by the presence of slow eye movements, this drowsy sleep stage can be easily disrupted causing awakenings or arousals. During this short period (lasting several minutes) your brain wave activity begins to slow from that of wake.

While drifting in and out of Stage 1, people may occasionally experience sensation of falling, hypnic jerks (called Myoclonus) or abrupt muscle spasms

Though arousals or awakenings are prevalent, Stage 1 is important as it allows for the body to enter Stage 2; the first quantifiable stage of NREM sleep.

It is the first actual stage of defined non-REM sleep. In the second stage, your body starts preparing for deep sleep. Awakenings or arousals do not occur as easily as in Stage 1 sleep and the slow moving eye rolls discontinue. Your heartbeat and breathing slow, and muscles relax even further and yr body temperature drops.  Brain wave activity slows but is marked by brief bursts of electrical activity.

This phases occur for longer periods than Stage 1. For most, they comprises approximately 40-60% of total sleep time

Entering the third stage, you are now in deep sleep. Stage 3 is known as deep non-REM sleep. It reduces your sleep drive as it’s the most restorative stage of sleep and it occurs in longer periods during the first half of the night. It consists of extremely slow brain waves called delta waves, which are intermixed with smaller, faster brain waves.

Pay attention to this phase when taking a nap

If you take a short nap during the day, you’re still able to fall asleep at night. But if you take a nap long enough to fall into deep sleep, you have more difficulty falling asleep at night because you reduced your need for sleep.

Awakenings or arousals are rare and often it is difficult to awaken someone in this stage of sleep. People waking up from a deep sleep are disoriented or groggy. Instead Parasomnias (sleepwalking, sleep talking or somniloquy and night terrors) occur during the deepest stage of sleep.

This restorative stage does not last as long as Stage 2, lasting between 5-15% of total time asleep for most adults. For children and adolescents Stage 3 is much higher in duration.

Deep sleep focuses on your body

It is the most rejuvenating and restorative sleep stage, promoting human growth hormone and restores your body and muscles from the stresses of the day. Your immune system also restores itself.

Much less is known about deep sleep than REM sleep. It may be during this stage that the brain also refreshes itself for new learning the following day.

During deep sleep, you can expect the following:

The deepest state of sleep, where dreams occurs – REM

Entering the last stage, also called REM sleep (rapid eye movement). It  is the deepest state of sleep, where dreams occur and it is essential to re-energizing your mind. REM is associated with dreaming, memory consolidation, learning, and problem solving

In REM stage your eyes are closed but move rapidly from side-to-side, due to the intense dream and brain activity you go through in this stage. Your breathing becomes faster and irregular, and your heart rate and blood pressure increase to near waking levels.  Your arm and leg muscles become temporarily paralyzed, which prevents you from acting out your dreams.  As you age, you sleep less of your time in REM sleep.

In the REM period, you can expect the following:

REM can occur at time during the sleep cycle, but on average it begins 90 minutes following sleep onset and is short in duration as it is the first REM period of the night. Following REM, the process resumes starting with periods of Stage 1, 2 & 3 intermixed before returning to REM again for longer periods of time as sleep time continues

A person typically experiences three to five REM periods throughout sleep time with the longest REM period right before awakening for the day. Awakenings and arousals can occur more easily in REM; being awoken during a REM period can leave one feeling groggy or overly sleepy.  Consistent interruptions to REM sleep can lead to a host of potential issues, such as  sleep inertia.

Everyone dreams. A French study  found that all people do in fact dream, whether they remember their dreams or not.

You spend about 2 hours each night dreaming but may not remember most of your dreams.  Its exact purpose isn’t known, but dreaming may help you process your emotions.  Events from the day often invade your thoughts during sleep, and people suffering from stress or anxiety are more likely to have frightening dreams.

Dreams can be experienced in all stages of sleep but usually are most vivid in REM sleep.  Some people dream in color, while others only recall dreams in black and white.

Your body goes through the 4 sleep stages from four to five times each night. The progression through the various stages of non-REM sleep to REM sleep can be visualized through the hypnogram, as following: 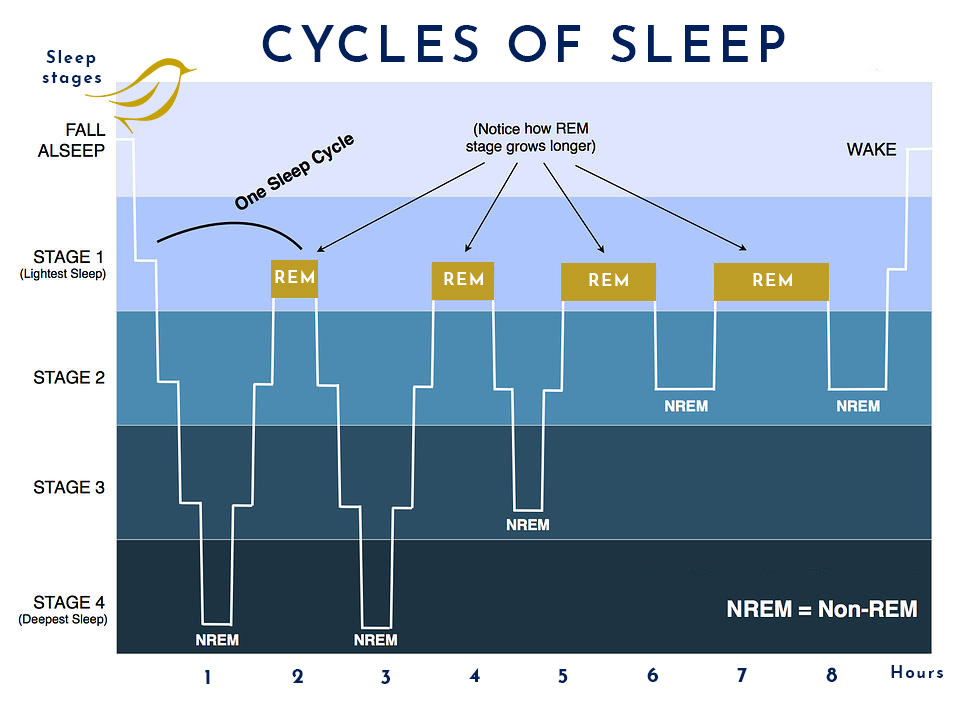 As you can see cycles earlier in the night tend to have more non-REM sleep while later cycles have a higher proportion of REM. By the final cycle, your body may even skip non-REM deep sleep entirely.

Considering that each single cycle last more and less 90 minutes, you can immediately see that overall your body spends more time in non-REM phases of sleep.

Sleep changes throughout a person’s life.  From a newborn, through toddler years, school age, adolescent and adulthood, sleep is changing.

Do not have distinctive sleep waves.  Sleep is categorized as “Active”, “Quiet” and “Indeterminate”. Active sleep is the equivalent to REM sleep and quiet sleep is equivalent to non-REM sleep.  A majority of the time, newborns are in active sleep which allows for frequent arousals or awakenings; this is necessary for regular periods of feeding.

Average sleep time is 9.5-10.5 hours per 24 hour period. Typically naps will reduce to 1 per day most likely occurring early in the afternoon to allow for proper nighttime sleep.

Sleep time is similar to that of toddlers, approximately 9-10 hours per 24 hour period.  The afternoon nap usually subsides around 3-4 years for a majority of children. Stage 3 sleep still remains high in relation to total sleep time.

12 years and beyond: Adolescent

Sleep time for adolescents is approximately 9-9.5 hours per 24 hour period.  There are physiological changes in circadian rhythm that occur causing sleep onset to be later. This internal shift is the cause for many adolescents to have later lights out and the desire to want to “sleep in” in the morning.

As a person ages, the circadian rhythm shifts back and sleep again appears to regulate to approximately 6.5-8 hours of sleep per 24 hour period as adult.

How much sleep do you need?

Your need for sleep and your sleep patterns change as you age, but this varies significantly across individuals of the same age.  There is no magic “number of sleep hours” that works for everybody of the same age.

Babies initially sleep as much as 16 to 18 hours per day, which may boost growth and development (especially of the brain).  School-age children and teens on average need about 9.5 hours of sleep per night.  Most adults need 7-9 hours of sleep a night, but after age 60, nighttime sleep tends to be shorter, lighter, and interrupted by multiple awakenings.

In general, people are getting less sleep than they need due to longer work hours and the availability of round-the-clock entertainment and other activities. Many people feel they can “catch up” on missed sleep during the weekend but, depending on how sleep-deprived they are, sleeping longer on the weekends may not be adequate.

Take a look to our article “The importance of a good night’s sleep” , where you can deeply understand the impact of sleep deprivation on your health.

You have to take into consideration that the quality of sleep  have a direct impact on your life, as well as the quantity. Actually the World Sleep Society states that sleep quality is a better indicator of overall health , mood, and life satisfaction than sleep quantity.

Impact of unappropriated pillow on your sleep

Do you know that one of the major causes of nocturnal awakenings are the shifts of sleeping position and that often the causes are hidden inside your bed, particularly behind an unappropriated pillow?

A pillow that doesn’t suite your measures can feel you discomfort, causing a restless sleep with a lot of awakenings trying to find a better position. Moreover an unappropriated pillow can affect the way you lay on your bed, causing you bed sleeping habits with a direct impact on your spine and more in general on your health.

If you want to discover if your sleeping position is causing you health risks or if you want to understand how to improve it read our article.

Nightingold can help you designing the pillow for YOU.

We are happy to put at your disposal our knowledge.

Want to join the discussion?
Feel free to contribute!